Annoyingly, I was hit with a problem after an update via update-manager on Ubuntu.

Firefox just wouldn't start and when I invoked it via a korn shell, I received the rather terse error 'Bus error' and nothing else. How wonderfully educational.

I took the option of installing Galeon, and then got hit with the same error. In the end, I installed Lynx (great text browser) and had a poke around.

My eventual 'solution' was to check the updates history, and then uninstall Firefox via Synaptic. Some of the related programs that were uninstalled were ubifox and xulrunner.

Afterwards, I was able to start Firefox again - to my relief.
Posted by John G at 00:10 No comments:

USB batteries - do your bit for the environment!

I've always tried to use rechargeable batteries, and it must have been at least 15 years since I felt the need to buy anything else.

I'm known to some as Gadget Boy and I was asked the other day about my USB batteries. I've had 4 of them now, and purchased them around 2 years ago. I'll have to admit that they are quite expensive at around £10 for just two AA size batteries! 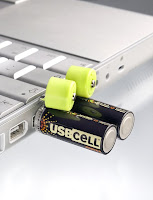 
Still, they are very, very useful things to have. Run out of battery power? Simply stick them in a laptop, your PlayStation3, your PC, in fact anywhere that has a USB port. They start charging immediately (solid yellow light) and then turn to a flashing light whilst trickle-charging.

Whoever had the bright idea to make these things in the first place was a genius.
Posted by John G at 16:02 No comments: