Ale and I met up with some friends last night and hit the bowling alley here in Montevideo.

After some nosebag i.e. the usual chivito, the bowling started in earnest. Now I must point out that they do things differently here, because all the bowling alleys looked strangely bereft of any lighting whatsoever. Even more worrying was the fact that some of the bowling balls were fluorescent and the icing on the cake was when a smoke machine starting pumping loads of guff everywhere.

The smoke machine only seemed to start chucking out thick clouds when it was ME taking my go. I did suspect that someone had had a 'word' with the manager and it was all a conspiracy to put me off my stride. Well, those cunning Montevideans failed in their plan, if there ever was one, of course.

After an initial shaky start where I lost the first match, I won the second match by a small margin. By this time, a couple of people weren't playing and the final game started with the score at 1-1 (one for me, and one for a guy called Nacho Mullin). This game I was on fire, and I got 3 strikes and 5 spares. My total rocketed upwards and I ended the game on an all-time best of 167!!!

It's now early Sunday morning as I write this, and as usual, Ale is inspecting her eyelids. We have the christening for Magui and Nacho's son Nicolas today so I'll probably post back here with a few pictures later.

Yay! I finally found a similar application to stream media to my PS3.

I used to use TVersity which is an excellent application, but unfortunately - they don't support Linux aka Ubuntu yet. Since I use Ubuntu as my primary operating system of choice, I was without my music collection of 18 Gb worth of stuff.

I found out about Mediatomb via the Ubuntu forums and promptly installed it via:

Server GUI runs on port 49152 on my system, and the server itself on port 49153. After a quick bit of configuration which involved setting the directories that needed to be scanned i.e. recursive MP3 paths, I was up and running. The mighty PS3 picked up the new media server without even scanning, so I assume this is done automagically.

Mediatomb set itself to automatically run on boot, which I was able to verify by popping in to the Webmin server config page.

I'll post back with any anomalies I may discover, but hopefully it will be all plain sailing from now on. What an excellent piece of open-source software!

The legendary IceMan aka Ian Pinder

I recently managed to get in contact with Ian Pinder, who was also known as the Iceman. Ian's car back in the days was a brown Cortina that was filled to the brim with Earthquake subs and literally blew me away. Whilst most of the other nutters in souped-up cars seemed to spend loads of money getting Carlos Fandango wheels and drainpipe exhausts fitted to their silly little Vauxhall Novas/Corsas, the big guy simply turned up in his Cortina and blew them into the weeds.

I used to go to both the Chelsea cruise and also the one at Dartford - which then became the Lakeside cruise. I must point out that this was years ago, say around 1994-1996. It was all good-natured and there was no trouble, and I really enjoyed it. My car at the time was a Honda Prelude '89 4WS which had been lowered to sit on the floor.

Going back to Ian's car, the sound emanating from this beast really struck a chord with me since I loved the low low bass it was producing but so many cars seem to be either hard mid-bass or loads of tweeters sounding like lasers going off. The situation would normally be that you'd hear the plank coming in his Escort RS Turbo because of the shrieking tsk tsk coming out of his windows, just as he came around the corner. With the Iceman's car, it simply came from nowhere (bass being omnidirectional) like a great big scary monster. Hugely powerful and the only thing I've heard since that came anywhere close was the Cerwin Vega van at the IASCA finals in Dallas, back in '96.

I've since discovered that his latest project puts out around 30,000 watts - perhaps I'll get the chance to see it (or perhaps more importantly - feel it) when I next return to the UK.

As a certain Sacha Baron-Cohen would say, REESPEK 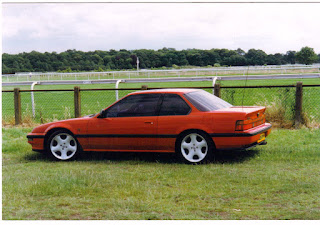 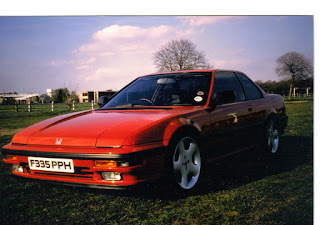 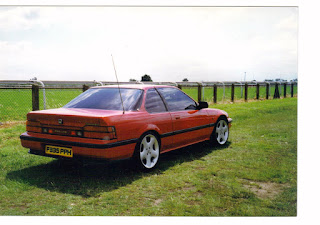 I've managed to sort the problems out with my domain, and everything is now working perfectly again so I can afford to breathe a sigh of relief.
Posted by John G at 13:30 No comments:

I've no idea why but in the last 2 or 3 days I have been receiving rejections when emails are being sent to my johnnyboy.cc domain. I've raised this with Support at Virgin and hope to get it resolved soon. Please send any emails to my arsenal at adinet dot com dot uy address (email address is obfuscated to stop bots from picking it up, so please reconstruct it replacing the word dot with an actual dot)

I have already changed things at my domain forwarding service to point to another email address so it should resolve itself automagically in the next few hours, dependent on when the change goes through obviously.

I spoke with my parents yesterday, after they had arrived back from a trip on their narrowboat which is moored in Northants somewhere. It was previously based at Stoke Golding but the trip always took a good few hours so they made the decision recently to moor it closer to home. Whenever anyone makes mention of the 'barge' to me in conversation, I always hastily correct them - it's a narrowboat, not a barge. It reminds of of one of my old teachers (Bill Linton) at school who used to fly into an incandescent rage and stated that it was a ship, not a boat.

Anyway I digress as usual. The main reason for posting was to attach the following picture, which I think perfectly shows a lovely autumnal scene, taken from the stern of Queenborough No.3 at Stoke Bruerne, and it was taken during the last couple of days when my parents had some friends stay over on the boat - Brian and Helen Hipgrave.

For those of you that don't know, Queenborough was named after the place on the Isle of Sheppey where my dear Nan and Granddad used to live.
Posted by John G at 12:52 No comments:

Clown in a Jeep

This one is a classic.

Spotted this old Jeep which had seen better days after travelling back from one of Ale's mum's apartments in the Prado area of Montevideo. When I first saw it, I thought it was on a kerb - the listing was so bad. Anyway, that was nothing.

It pulled away and when we caught up with it at the next junction, the full horror story was revealed. Anyone who reads this blog knows full well my disdain at the decrepit motors on the roads over here. Some of them are just totally rusty, most don't have legal exhausts (if one at all) and as for lights? I give up.

Well, this one was no exception. With an exhaust loud enough to make your ears bleed profusely.

Anyway - I digress. As you can no doubt see from the picture, the Jeep was leaning heavily to one side. The offside rear suspension was totally mullered and just waiting to violently snap. When we got closer, I was amazed to see not 2 people but at least 6 or 7 people jammed into this thing. The only thing I've seen more dangerous is the old pizza bike delivery drivers who seem to excel in driving around with no lights on. If it's a personal choice, then I'd have to question their sanity....

After an early evening walk along the rambla, we had a phone call from Majo suggesting we went to see a film. After taking a quick peek at the MovieCenter website (apologies for the spelling but it's very Americanised here, or should I say Americanized) - we decided on a film from the UK.

Called 'Death at a funeral', it was a comedy based on the events surrounding a middle-class funeral in a slightly posh area of England, somewhere near Crawley - IF that's possible. Notable characters included the delectable Daisy Donovan (of 11 o'clock Show fame), Kris Marshall (My Family and those bleeding BT ads) and a dwarf! Best performance was from Simon, who was playing Daisy Donovan's fiancee in the film. You'll have trouble believing that he's natively Texan.

It was hilarious and I felt intensely proud that British humour had managed to cross the Atlantic and keep the crowd in the cinema laughing or gasping all the way through. Top stuff.

It was subtitled in Spanish so there were a few moments where the audience started laughing either before or after me, but that's something you get used to. All in all, well recommended.
Posted by John G at 12:21 2 comments:

Holiday over, now back in Montevideo

I was back in the UK for a whole month. Spent most of my time guzzling the world's resources by lumping petrol in the Audi V8 hehe.

I did manage to meet up with Alden for the usual chicken lunch session, and also Paul Connor and Mark Debruin.

On the work front, I've had varying degrees of success. One job for Sabre Airline Services in 2nd line Tech Support wasn't offered to me as I was TOO experienced whatever that means. A back-handed compliment I think! Another job is mine for the taking at an English Language institute here in Nueva Helvecia/Montevideo (www.institutovinculum.com) but it's relatively poor money.

My last hedged bet is with Tata, but with the outsourcing arm called Tata Consultancy Services. They operate here in www.zonamerica.com which is a free trade zone with lots of tax perks. The job is affectionately titled VI Analyst which sounds suitably noncey and I went for the interview and landed the job, on a good salary. This all kicked off the day before I left for the UK, so I was told they needed to approach the client (Johnson & Johnson, US) to gain authorisation. End of story, or so I thought. After a month of lazy shenanigans in the UK, I emailed them on my return to be met with the reply that they were waiting for an Oracle DBA so my job is on hold.

Forgive me for sounding pedantic, but when someone rings you and offers you the job and you accept, then surely you start work? Call me an old-fashioned Luddite if you want, but is it meeee???? hehehe

Highlight of my week is going to be meeting up with 5 English people who've made the trip to Uruguay. I think Ale wants me to welcome them with open arms and make them cups of tea ;-)