I had the pleasure of taking a call from someone at Sony CS today.

They rang me to apologise for all the problems I'd had with my PS3, and offered me a free game, cancelled my subscription to their 'ContinuousPlay' service, and re-instated the 12 month guarantee, effective immediately.

An excellent response from them, and it's merely confirmed in my mind that they are great to deal with -- it's nice to see that instead of seeing someone as customer XYZ, they've actually managed to renew my faith in the company.

Well done SONY, I hope they treat other customers in a similar manner. If they do, then they will have very happy customers.

My play time suddenly ended yesterday when the PS3 decided to go all 'borked' on me.

I'll be on to Sony UK Customer Care about this, since it was only replaced in December 2008. That was a factory refurbished unit apparently, but it looked like new to my untrained eye. So that's 4 months use... for the flagship product.

There HAS to be a design fault with this 60Gb model. Friends that have the 40Gb model have had no problems.
Posted by John G at 13:59 No comments:

I have installed Windows 7 (Release Candidate - Build 7100) on my laptop and the install went through fine. However, booting into Windows 7 results in a black screen with the Windows logo showing, every single time.

It will sit there all day long if you leave it, but I lost my patience after 20 minutes. Windows 7 will then complain on reboot that it wants to fix your computer by doing a 'Start repair" but hold on.... it will fix things temporarily but you'll be back to square 1 when you reboot.

It would seem that Windows 7 gets easily confused by the fact you have a second external monitor connected. Now I would have thought that if XP can successfully install and run without problems, then the new all singing and dancing techno kid on the block would be able to do the same, without breaking into a sweat. Not so.

I cannot believe that Microsoft made such a stupid error, and a basic one at that. Most, if not all laptops that I have encountered on my travels have had a VGA port on the back for rigging up to an external monitor.

Why it doesn't complain about it at install time is anyone's guess.
Posted by John G at 18:53 No comments:

I'd noticed recently that my CPU usage had crept up on my ACER laptop with an ATI graphics chip and was slowing down simple things like scrolling. I switched off my folding@home client straight away, and then delved deeper.

I tried the usual fix-all of moving my .gconf path so it would be recreated next time I started the Gnome GUI but this made no difference.

I discovered an option however on the Xorg file xorg.conf which controls the graphical setup. Simply adding the following 2 lines to my xorg.conf file and then restarting gdm and all was back to normal. I love it when a problem like this can be fixed by typing 2 lines into vi ;-)

Sweet potatoes, as they say.

Swine flu and the media 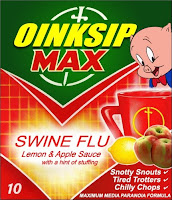 I saw this recently after it was sent to me by Maggie of 'Maggie & Dave' fame... and I thought I'd share it with you.


It just seems to sum up the massive media exposure given to the subject, and dare I say it - perhaps too much?