Fired up my copy of Modern Warfare the other day as I'd started to get bored with all the nonsense of MW3/MW2 and I fancied getting my gold shotgun out again.


Anyway, had to download the latest update to v1.40 and once the update had completed, I was met with the following screen where it asked me a question without actually stating exactly WHAT the question was: 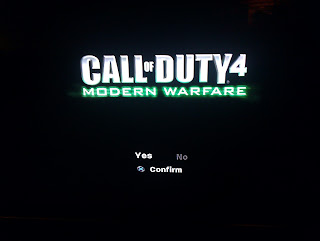 I could move between Yes and No but pressing the X button on the PS3 controller had no effect whatsoever. I made contact with Activision who admitted there was a problem and they were working on it.
Posted by John G at 13:27 No comments: